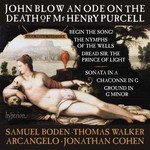 An album of music for the connoisseur-of extraordinary singing as much as of the English Baroque. This wonderful recital ranges widely across Blow's vocal and instrumental music, Arcangelo again demonstrating their versatility in repertoire which will be a real discovery for many.

"For many, getting to know these pieces will be persuasion enough, but the performances complete the seduction with their expert playing and singing, vigorous but tastefully realised sense of style and - despite being mostly one-to-a-part - firmly shaped contours and effective illustrative touches...With a recording that is wonderfully clear and alive, everything seems to be going right for Jonathan Cohen at present." Gramophone Editor's Choice October 2017

"There is so much to enjoy in this superb collection of John Blow's odes and instrumental music: fine solo and ensemble singing, beautifully articulated strings, crisp and tangy theorbos, punchy baroque guitar, all driven by the abundantly talented Jonathan Cohen at the harpsichord and chamber organ." The Observer

"Duets for high tenor seem to have been something of a Blow speciality…and in Samuel Boden and Thomas Walker, director Jonathan Cohen has harnessed a quintessentially English sound whose lyricism fits the vocal writing like a glove…Throughout, the instrumental contribution is a joy; Cohen's direction a model of stylish empathy and suavely-negotiated gear changes." BBC Music Five Stars - Choral & Song Choice December 2017

Libera Nos - The Cry of the Oppressed