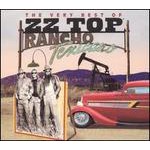 Since Rhino released an exhaustive four-disc ZZ Top box in October 2003, some may question the appearance of a double-disc retrospective in June 2004, a mere eight months after the box set. The two may be released awfully close to each other, but they do play to different audiences -- in other words, there are a bunch of fans who want all the hits, but not a full box set, and that's what the 38-track Rancho Texicano: The Very Best of ZZ Top delivers. Not that it gets everything right -- there are a few classic album cuts, like "Leila" and "I Got the Six," that probably should have been included, and ending the set with a live version of "Cheap Sunglasses" and 12" remixes of "Legs" and "Velcro Fly" leaves a bad aftertaste -- but it gets it close enough, containing all of their biggest hits and a great cross-section of album tracks and AOR favorites. And apart from the aforementioned bewildering final three tracks, it's sequenced well, with the down-n-dirty '70s material on the first disc, and the MTV hits from the '80s on the second. There's still a need for a single-disc that has all the biggest hits, but until that comes along, Rancho Texicano is the best and most concise overview of that lil' ol' band from Texas. ~ Stephen Thomas Erlewine, Rovi