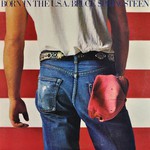 Bruce Springsteen
Born In The U.S.A.

Born in the USA features some of the most radio-friendly performances in his en­tire discography and was the album which truly confirmed Springsteen as a global rock superstar. As commercially accessible as the singles were, the hooks brilliantly disguise much of the emotional turmoil simmering underneath (case in point: the anthemic title track, a harrowing tale of a Vietnam veteran that Ronald Reagan attempted to coopt for his presidential re-election campaign).

Altogether, Born In The USA amassed seven Top 10 hits, including 'Dancing In The Dark,' 'Glory Days,' and 'I'm Goin' Down,' and the album became 1985's biggest selling LP, spending 84 weeks in Billboard's Top 10­.