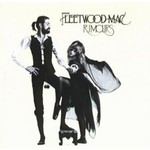 'Rumours' made the band one of the most iconic bands of the 1970s and garnered wide critical praise, earned the Grammy for Album of the Year, and has now sold more than 40 million copies worldwide since its 1977 debut.

Mick Fleetwood, John McVie, Christine McVie, Lindsey Buckingham and Stevie Nicks recorded 'Rumours' against a backdrop personal turmoil, chronicling their raw emotions in songs like 'Go Your Own Way', 'Gold Dust Woman' and 'Dreams', the latter becoming the band's first number one smash. Also included is bonus track "Silver Springs", which was originally a B-side to the single of "Go Your Own Way".

'Rumours' is without a doubt, one of the greatest and most respected pop albums of all time. It's exemplary songs are matched only by the intense and emotional feelings that come across in both the playing of the instruments, the stunning vocals, and also the skillfully penned lyrics.

Lindsey Buckingham and Stevie Nicks had recently joined and on this second album with the group, they lead Mac away from the blues, creating an emotional love album in the process. Stevie's songs are dreamy and mystical ("Dreams," "Gold Dust Woman); Christine McVie's have ultra-catchy melodies ("Don't Stop"); and the genius guitarist / vocalist Buckingham oversees all to create deceptively simple songs ("Second Hand News," "Go Your Own Way"). "The Chain," was written by the whole group and is Fleetwood Mac at their most impressive.

'Rumours' is a timeless album of perfect playing, stirring rhythms and rich harmonies.