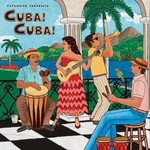 No place is more defined by its music than Cuba. Music pours out of every doorway and vintage taxicab. A party in Cuba without music? Unthinkable. Indeed, there are three essential elements to a cumbancha (Afro-Cuban slang for party): good company, a bottle of rum and musical instruments (the rum bottle can work, as can tables, boxes, pots, pans and any other household object that makes a noise when banged or plucked). You don't have to be particularly accomplished, just willing to participate.

Why is Cuba so musical and why has this relatively small island had such an oversized influence on the soundtrack of the world? Just as a hurricane forms when two distinct weather systems collide, Cuban music is the product of a perfect cultural storm. The fusion of European and African cultures that took place in Cuba was the result of a forced and painful marriage. However, the clash of civilizations that is the historical legacy of the New World also served as the foundation for Cuba's rich musical traditions.
Cuba's unique musical identity was well-developed by the beginning of the 20th century, but the flames burned even brighter with the influx of new sounds such as jazz from the U.S. Indeed, for many years, Cuba was America's Caribbean playground as thousands of tourists flocked to Havana to gamble, cavort and soak up the island's sun. It didn't take long for the Cuban music to be discovered abroad, and, by the 1950s, people across the globe were dancing to rumba, mambo and cha cha cha.

Then, suddenly the spigot seemed to be turned off. After the 1959 revolution, Cuban music continued to evolve, but for some abroad, Cuba became a sort of cultural Galapagos: a place almost untouched by the outside world. Meanwhile, many Cuban immigrants to U.S. cherished the old school styles as way of retaining ties to the homeland they left behind. The global success of Buena Vista Social Club in the 1990s revealed that, even though Cuban music on the island had changed over the last 50 years, the international public still liked the classic styles. As this collection demonstrates, those styles are alive and going strong in the hands of younger musicians both inside and outside of Cuba.

Cuba is one of those musically fertile places Putumayo continues to return to.