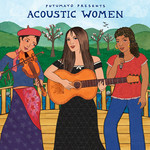 Our journey begins with Brazilian samba-inspired singer-songwriter Fernanda Cunha, whose career has spanned seven solo albums and extensive international tours. We then take a trans-Atlantic journey to Denmark for Stine Michel's "Frejas Indblik" (Freya's Insight). Michel sings a fascinating tale of the Nordic goddess Freja opening a shop in Copenhagen and experiencing humanity.

Our next stop takes us to the Spanish island of Palma de Mallorca, where we are treated to the captivating voice of Buika singing "La Falsa Moneda." Buika, whose parents emigrated from Equatorial Guinea, is one of Spain's most celebrated singers. The female trio Elle & Elles from Martinique follows, offering some Caribbean sunshine with "Samba Lé," which illuminates the diversity of people in the Caribbean. Next, Canan Uzerli's "Zaman" explores the singer's Turkish roots and laments the fleeting nature of time.

The second half of this album kicks off with Mónica Giraldo, her third appearance on a Putumayo collection. Born and raised in Colombia, Giraldo has received a Latin Grammy nomination and toured the world. Her song "Todo Me Lleva a Tí" is a love song inspired by the traditions of the Nueva Cancion (New Song) movement. From Colombia, we head back across the ocean to Sweden for CajsaStina Åkerström's "Är Det Så Här Det Känns Att Komma Hem" (This Is How It Feels To Come Home). Once an archaeologist, Åkerström now dedicates her career to music but remains inspired by ancient Scandinavian folklore and traditions.

Lebanese singer-songwriter and visual artist Tania Saleh's moving composition "Ayya Shi" was a response to the turmoil and insecurity in 2010/2011 in the Middle East. Saleh sings: "Anything can happen anytime / Stay alert, stay awake…" Francesca Blanchard was raised in France and Vermont and, in "Tu n'existes pas," sings to her imaginary lover: "In the city of my dreams / You live by my side / It's the world I've invented / You're just a dream that I have rented." The international journey winds up with Bendith, a collaboration between Welsh groups Colorama and Plu. Their song "Angel" is an ode to unconditional love.