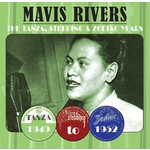 The release on CD for the first time of Mavis Rivers' early New Zealand recordings for the TANZA and the Stebbing labels transports you back to the dawn of recorded music in Aotearoa.

During the New Zealand years of her career, Mavis became one of our most prolific and versatile recording artists covering pop, jazz, novelty, country and western and swing genres among her 53 released tracks on 78 rpm, long before the advent of albums. Mavis's first recording was released only weeks after Pixie Williams' revolutionary 'Blue Smoke' single.

Frank Sinatra once described Mavis as having the purest voice in jazz and she was the second signing to his newly-formed Reprise record label in 1960, after recording with Capitol Records from 1958.

For the Record - The Pixie Williams Collection