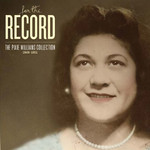 A stunning new digitally re-mastered collection of Pixie Williams' songs. Recorded 60+ years ago, these songs have never sounded so good.

In 1949, Pixie Williams gave voice to one of the most enduring popular melodies of the 20th century: Blue Smoke. This song was just the beginning and Pixie went on to record a further 12 songs, mixing universal themes and international musical styles with an unmistakable flavour of Aotearoa New Zealand.

Thanks For The Dance
more suggestions…