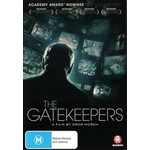 Israel's crushing victory over its neighbours during the Six Day War in 1967 left it in control of a vast, hostile population living under Occupation. Dealing with that population-in times of calm and times of violent uprising-was the responsibility of Israel's secret service agency, Shin Bet.

THE GATEKEEPERS offers a riveting and intimate insight into the Israeli-Palestinian conflict told by the six former heads of Shin Bet. In a style reminiscent of The Fog of War, their confessions of torture and terrorism, arrests and assassinations are illustrated with archival footage and chilling animations. These offer a window into the moral dilemmas they faced as they unfolded. The citizens they swore to protect against terrorism may have been safer as a result of their actions, but was the country any closer to peace? Theirs is the ultimate cautionary tale of what happens to people and nations alike when they try to answer violence with violence.

"The six men have different personalities that suggest varying styles of leadership, but what's remarkable about The Gatekeepers is how they speak in one voice about the moral complexities of their former jobs and their extreme pessimism about the future." AV Club

"The filmmaker doesn't speculate about why these men are talking, but he leaves you with an excellent guess." New York Post

"The film bravely pulls focus on Israel's behaviour as an occupying power, the treatment of the Palestinians and joins the growing list of recent films that cast a critical eye over a subject that was once deemed too thorny to question." 3AW