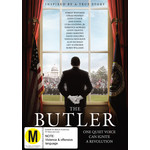 For three decades, Cecil Gaines (Academy Award Winner Forest Whitaker) served as the chief butler for eight consecutive US presidents, including Dwight D. Eisenhower, John F. Kennedy, Richard Nixon and Ronald Reagan. Working intimately with these world leaders at the White House, from his unique vantage point Cecil Gaines witnessed radical transformations in American history through the civil rights movement to Vietnam and the Cold War - and how those changes affected his life and family. Based on a true story, Lee Daniels (Precious) directs a stellar ensemble cast who between them have garnered 18 Academy Award nominations.

A brilliantly truthful film on a subject that is usually shrouded in wishful thinking, mythmongering and outright denial."* The New York Times

"As Cecil, Whitaker is mesmerizing. The actor seems to shrink into his imposing frame, summoning a performance of quiet, bottled-up force." Entertainment We­ekly

"With The Butler, director Lee Daniels has managed to "Gump" the Civil Rights movement. That's not necessarily a bad thing but there are times when so many famous cameos threaten to become a distraction, especially since they're only tangentially germane to the main story." Reel Views