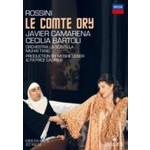 A BD from Zurich of the acclaimed production by masters of bel canto comedy, Moshe Leiser and Patrice Caurier.

Bartoli reminds us of her comic gifts and her naturalness as a stage actor - as well as her total sympathy with the music of Rossini.

A superb comic cast revel in the knockabout plot and excel in their delivery of Rossini's trademark vocal writing. Bartoli, "the passionate powerhouse of bel canto", gives a thrilling performance with "breakneck coloratura in endless variation" (NZZ Online).

Released in anticipation of Cecilia Bartoli's 2014 Whitsun Festival at Salzburg "Rossinissmo" and in time for her appearance at the Théâtre des Champs-Elysées in Paris in April 2014 as Desdemona in Rossini's Otello.

"Bartoli's vocal registers may not be quite as finely 'matched' as one might hope for...but the combination of classy singing and delighted playing quickly has one setting such quibbles aside...[Tang] leads with precision and point...[and] is capable of drawing sounds of rare beauty from the period instruments of the Orchestra La Scintilla." (Gramophone)

"Musical standards are high, with Tang and the orchestra bouncing the score merrily along. Bartoli sends herself up...vocally, she is in more consistent voice than on some recent recordings, with neither the higher nor the lower register giving her any trouble...Camarena's facility with high notes and his accomplished comic acting will have [Flórez] looking to his laurels." (BBC Music)