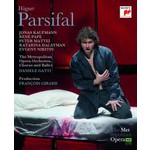 Wagner at first ordained that Parsifal be staged only in Bayreuth, at his own theater. The music drama was introduced there on July 26, 1882, six months before the composer's death. Against the wishes of Wagner's heirs, Heinrich Conried presented the U.S. stage premiere of the work during his first season as general manager of the Metropolitan Opera, in 1903. Protests from Wagner's widow, Cosima, brought the issue to court. Ultimately Conried won, and the Metropolitan's version was hailed by some critics as superior to Bayreuth's. The Met's next new Parsifal production, in 1920, was directed by Richard Ordynski and designed by Josef Urban, whose decors were not replaced until 1956, when the company presented a new staging by Herbert Graf. The Met subsequently offered new Parsifal productions in 1970 (Nathaniel Merrill) and 1991 (Otto Schenk). The company's new staging by François Girard, a coproduction with the Opéra National de Lyon and Canadian Opera Company, had its Met premiere on February 15, 2013, with Daniele Gatti conducting.

"Few better casts could be imagined than the one the Met has assembled here. Jonas Kaufmann is the rare Wagnerian hero you can believe in." **** Bachtrack

"The conductor Daniele Gatti draws diaphanous playing from the great Met orchestra and captures the shifting currents of this richly chromatic and complex score."NYTimes.com

"At 43 Mr. Kaufmann is in his glory, equally adept in German, Italian and French repertory. Handsome and limber, he is a natural onstage. The baritonal colorings of his sound, his clarion top notes, the blend of virility and tenderness in his singing, his refined musicianship - all these strengths come together in his distinctive Parsifal." NYTimes.com

"Jonas Kaufmann is a mostly quiet-introspective and unsure of himself-Parsifal, and dynamics aside, this is clearly Girard's reading. Kaufmann's soft singing is luscious and purposeful, devoid of affectation, but when he lets the voice out-as in "Amfortas! Die Wunde!"-he commands attention in an entirely different, very human way. It is a divinely beautiful performance. Almost stealing the show is Peter Mattei as Amfortas, whose agony and self-hatred are terrifyingly real. As penitence, one assumes, this Amfortas crawls more than he is carried, he pleads more than he rants; it is almost difficult to watch." (ClassicsToday May 2014)