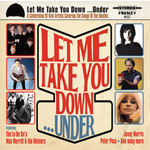 'Let Me Take You Down...Under' is a celebration of Kiwi artists performing the songs of The Beatles. Contrasting interpretations run rampant on this exciting 25 track collection which features many of our top artists from the last 50 years either playing note for note renditions of Beatle songs or completely dismantling the songs before re assembling them in their own style.

The La De Da's recorded their version of 'Come Together' at Abbey Rd while Chris Knox recorded his version of 'Baby You're A Rich Man' in his front room. You can hear the Underdogs in the process of shocking the nation as they perform 'The Inner Light' live on C'mon 68 under the influence which prompted the Truth headline 'TVNZ GOES TO POT'.

Brass laden versions of 'Hey Bulldog', 'Good Day Sunshine', 'Hey Jude' and
'With A Little Help From My Friends' are all delivered in a high octane soulful
style by Tom Thumb, The Rebels, Max Merritt and The Chapta respectively.
Lew Pryme tackles one of the least covered Beatle songs 'Penny Lane' with
aplomb just weeks after the Beatles version.

Ray Columbus and The Invaders were the first local act to record Beatle
tracks and their versions of 'I Saw Her Standing There' and ' I Wanna Be Your
Man' both from 1963 are also featured. Wellington band The Dizzy Limits
had a National Top Ten hit in December 1969 with their version of 'Golden
Slumbers/Carry That Weight'. The In-Betweens recorded several successful
bubblegum singles, but their true musical ability is reflected in their excellent
versions of 'While My Guitar Gently Weeps' and 'The Night Before' which can
be found lurking on two of their B sides.

A wistful version of 'Here There and Everywhere' is delivered by Suzanne
while The Brainchilds reverently handle 'Tomorrow Never Knows', meanwhile
Jenny Morris adds a slight country lilt to 'I've Just Seen A Face'.

Rob Guest as vocalist with The Apparition and Annie Crummer as vocalist
with Gotham City Express made their recording debuts with Beatle songs and
both are included.

Eliza Keil reminds us once again why she was one of our leading female
vocalists during the sixties and seventies with her classy rendition of George
Harrison's 'Something' while Larry Morris shows his versatility with his
montage of 'The Long and Winding Road' and 'Yesterday'.

DINAH LEE Yeah Yeah We Love Them All
RAY COLUMBUS AND THE INVADERS I Saw Her Standing There
TOM THUMB Hey Bulldog
THE LA DE DA BAND aka THE LA DE DA'S Come Together
THE REBELS Good Day Sunshine
MAX MERRITT AND THE METEORS Hey Jude
THE CHAPTA With A Little Help From My Friends
THE BRAINCHILDS Tomorrow Never Knows
THE IN-BETWEENS While My Guitar Gently Weeps
THE IN-BETWEENS The Night Before
SUZANNE Here, There And Everywhere
JENNY MORRIS I've Just Seen A Face
THE SATELLITE SPIES (with NIGEL LEE) Ticket To Ride
THE GOTHAM CITY EXPRESS (with ANNIE CRUMMER) Imagine
THE APPARITION (with ROB GUEST) Doctor Robert
THE RAYDERS I Feel Fine
PETER POSA She's A Woman
LEW PRYME Penny Lane (Unreleased)
THE DIZZY LIMITS Golden Slumbers / Carry That Weight
ELIZA KEIL Something
THE SECRETS The Fool On the Hill
LARRY MORRIS The Long and Winding Road / Yesterday
RAY COLUMBUS AND THE INVADERS I Wanna Be Your Man
CHRIS KNOX Baby You're A Rich Man
THE UNDERDOGS The Inner Light (Unreleased)

The Musical Adventures of The Clevedonaires, Cleves & Bitch
more suggestions…