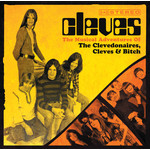 The Cleves
The Musical Adventures of The Clevedonaires, Cleves & Bitch

Every now and then an exceptional album will arrive on the scene that rewrites the history of local music. With the release of The Clevedonaires, aka The Cleves, aka Bitch the best kept secret of a few is now available for all.

Recorded between 1966 and 1973 this collection shows a group in constant evolution as they travel the world and traverse the musical landscape from the four part harmony folk rock opening track to garage rock, pop, psych, prog and glam rock. This musical journey starts in Clevedon, a farming community just south of Auckland where they recorded four singles on the Impact label during 1966-68.

In 1968 they were booked to entertain the ANZAC troops in Vietnam. The Viet Cong's Tet offensive soon put a stop to that just days before they were due to leave. With all of their gear packed and no bookings, they headed to Australia where they shortened their name to The Cleves and went on to become one of the hottest prog/ psych bands on the congested Australian scene.

1971 saw the release of their highly acclaimed self titled debut album. Soon afterwards they decided to try their luck in the booming UK rock scene. They changed their name once again, this time to the more confrontational BITCH.
With only enough money to last a few months they took a huge gamble by pooling all of their money and hiring the legendary Speakeasy Club in London for a one night showcase. Guests were invited from all of the major record companies and suprisngly they all turned up. By the end of the night there were two major labels bidding with WEA eventually clinching a deal with a 10,000 pound contract.

An album was recorded, mainly at Apple, George Martin's AIR studio and Morgan Street studio. Tony Ashton and Jim Ryan, (Carly Simon's guitarist) produced and Madeline Bell and Doris Troy provided backing vocals on several tracks. The album was completed but never released. Bitch's two singles for WEA appear on the CD along with four tracks from the unreleased album.