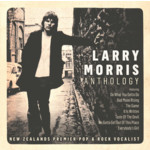 One of the first names that rolls off the tongue when discussing New Zealand Music Icons is that of Larry Morris. Larry began his career at 17 years old as the front man for one of our greatest bands of all time, Larry's Rebels.

Larry's Rebels went on to have seven Top 20 records in a staggering 22 month period, a feat that took Split Enz five years and the Exponents nine years to achieve. Larry's Rebels are well documented in the annals of New Zealand Music history. This CD focuses on Larry's long and illustrious solo career and as front man for groups, Shotgun and The Larry Morris Band.

After Larry left the Rebels in 1969 he was immediately groomed by management as a teenybopper styled pop singer. Larry became a regular on the weekly music shows C'mon and Happen In, which projected him into every living room in the country, for several years. The Hits kept coming: Bad Moon Rising, The Game and The Hunt - which was a Finalist in the 1969 Loxene Gold Disc Awards.

It was a more mature Larry who released the album, 5.55.A.M. in 1973. And, after being a guest of Her Majesty for four years, Larry a now, harder-edged rock singer with an attitude, released the album, Reputation Don't Matter Any More in 1978. His current band The Larry Morris Band have been an integral part of the local scene for over 24 years.