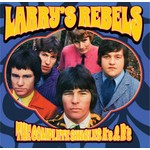 Between 1965 and 1970, Larry's Rebels created a recording legacy that no other New Zealand band was able to achieve. This legacy comprises a cache of well-crafted pop/rock singles that span those musically critical years. By being active during this period, the band's music encapsulates all genres of sixties music, moving from Beatlesque beat to pop ballads to frantic rockers and psych-tinged masterpieces, all recorded with confidence and period style, they were the perfect band for the perfect time.

Several interesting facts emerge from the group's catalogue. Firstly, over a 22-month period, they had seven top ten hits (it took Split Enz and The Exponents seven and nine years respectively to achieve the same result). In addition, the band have appeared on 36 separate artist compilations of Kiwi music. No other local artist has reached double figures aside from Ray Columbus. Larry's Rebels have been inducted into the prestigious New Zealand Music Hall of Fame, and 2020 also sees the release of an extensive and meticulously researched two-part biography, chronicling the group's eight year career.

This Empty Place
So Much In Love With You
Long Ago, Far Away
Could This Be Love
My Prayer
What Am I To Do
It's Not True
Since I Don't Have You
I Feel Good
Whatcha Gonna Do Bout It
Painter Man
You're On My Mind
Let's Think Of Something
Stormy Winds
Dream Time
I'll Make You Happy
Fantasy
Coloured Flowers
Everybodys Girl
Halloween
Coca Cola
Do What You Gotta Do
Looking For A Way
Mo'reen
By The Time
My Son John (The Rebels)
Passing You By (The Rebels)
Can You Make It On Your Own (The Rebels)
I Can See The World (The Rebels)

And Now A Word From Our Sponsor: 70 Years Of Classic Kiwi Ads
more suggestions…