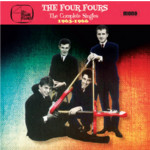 For the first time on CD, The Complete Singles of The Four Fours from 1963-1966, this album has a chronological track list of songs remastered from original archive tapes. The Four Fours started life in 1957 in Tauranga as an unnamed duo mainly playing foxtrots, waltzes and jazz standards. By 1958 the group were playing rock & roll. This collection includes all of their New Zealand singles before they left for the U.K in 1966 where they changed their name to the Human Instinct.

The Guitar Style of Peter Posa

Whispering Afraid / Shooting Stars Are Only Seen At Night