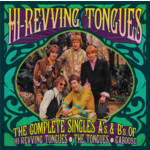 The Complete Singles A's & B sides of Hi Revving Tongues, The Tongues & Caboose. This collection is a chronological journey through the singles collection of one of New Zealand's more popular and interesting groups from the late 60s- early 70s. Originally formed in mid-1967 to showcase group leader Mike Balcombe's burgeoning songwriting ability. Chris Parfitt (the group's vocalist) also started writing material and over the next 2 years, the group released a series of unique homegrown singles which until now have mostly never been on CD before. What makes this collection unique is the diversity of material which embraces most genres from this period including pop, pop psych, Motown, baroque and rock.

The group's hits including 'A Tropic of Capricorn', 'Rain & Tears' and 'Elevator' are all here and they stand proudly next to the other 9 singles...including an unreleased 1972 single from CABOOSE (their later incarnation). Chris Parfitt (the group's vocalist) left the group just after they won the 1969 Loxene Gold Disc Award for 'Rain & Tears' which was also a national # 1 record. The group shortened their name to the Tongues and released an album and 2 singles before heading to Australia where they became CABOOSE who left behind one single and an unreleased album.

(The Psychedelic) Illusion
Hate To Go
Not Some Of The Time
You'll Find Me Anywhere
Come Back And Love Me
I've Been Lonely Too Long
A Tropic Of Capricorn
Baby I Need Your Loving
Make Yourself At Home
To My Love
Elevator
You'll Find Me Anywhere (second version)
Baby Come Back To Me
Little Red Rooster
Rain And Tears
Watermelon Man
Take Me To The Pilot
Highway
Aspen Colorado
Goodbye Holly
The Ballad Of James A. Lane
Casey's Hat (part 1)
Little Andy (unreleased single)
For Us All (unreleased single)

The Guitar Style of Peter Posa

Whispering Afraid / Shooting Stars Are Only Seen At Night