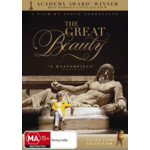 Life is a performance. The city, its stage. You haven't seen Rome until you've seen THE GREAT BEAUTY. One of the most spectacular and internationally heralded films of the year, Paolo Sorrentino's Academy Award winner is a powerful and evocative tale of hedonism and lost love, and an extraordinary depiction of contemporary Rome.

65-year-old Jep Gambardella (the phenomenal Toni Servillo) is a jaded journalist and wealthy bon vivant whose early promise as a novelist has never been fulfilled, though his infamy remains. He lives in a luxurious apartment overlooking the Colosseum and is a regular of Rome's party circuit for the elite, a never-ending nocturnal parade of decadence that rages through antique palaces, immense villas and opulent terraces around the Eternal City. His worldview begins to shift after a man arrives on his doorstep and informs him of the death of his first love. Both troubled and moved by the revelation, Jep is flooded with memories of the past and ponders the promise of what may remain...