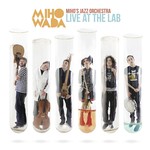 "Miho's Jazz Orchestra" is a dynamic jazz ensemble based in Auckland. The group was formed in winter 2011, purposefully combining established musicians from a variety of different genres. Their inaugural performance celebrated the launch of her score book "PLAY M!HO" and "Para Tí" (2011), and since then they have been busy performing around New Zealand and touring in Japan and Australia. They have recorded with Miho on her all-instrumental releases "Para Tí" (2011), "Wanderland" (2012), "EXIT 621″ (2013) and the last album "Mystery Banana″ (2014).

Eccentric electric violin virtuoso Pascal Roggen regularly performs internationally. Classically trained cellist James Donaldson has performed with many professional orchestras in both the UK and New Zealand. His warm cello sound adds richness and depth to the jazz orchestra. Folk guitarist and singer song-writer Andrew Rudolph was discovered by Miho at an open mic night and hand-picked for the shimmering colours of his guitar sound. Deliberately head-hunted by Miho from a dub band, Brazilian bass player Leo Corso is the sunniest bassist she has ever worked with. Accomplished jazz drummer Jared Desvaux de Marigny is the newest and youngest member of Miho's Jazz Orchestra, unifying the band and providing its essential and solid foundation. A prolific and highly acclaimed flute and sax player in her own right, Miho has performed internationally with artists including Nigel Kennedy, Iggy Pop and members of Buena Vista Social Club.

Described as one of the most entertaining jazz acts in New Zealand, Miho's Jazz Orchestra strives to uplift audiences through their positive energy and feel-good music. From fun-filled groovy tunes to nostalgic melancholy melodies, Miho seamlessly blends stylish contemporary jazz with her unique pan-Pacific flavour.