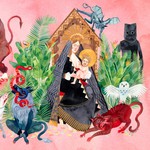 Josh Tillman AKA Father John Misty used to tour the world as drummer for the acclaimed Seattle six-piece Fleet Foxes. He left the well-loved Grammy-nominated folk band in January 2012 to focus on his solo career.

I Love You, Honeybear is the follow up to his stunning debut, Fear Fun. With this album, Tillman has created a sumptuously arranged, often melodramatic set of country-tinged singer-songwriter fare. What sets it apart is the lyrical sting in the tail, the Father John Misty guise has allowed Tillman to loosen up and write the most acerbic, carnal and surprisingly lovelorn material of his career.

"Song for song, I Love You, Honeybear outdoes its predecessor, Fear Fun, in nearly every way." - Under The Radar

1. I Love You, Honeybear
2. Chateau Lobby #4 (in C for Two Virgins)
3. True Affection
4. The Night Josh Tillman Came To Our Apt.
5. When You're Smiling and Astride Me
6. Nothing Good Ever Happens At the Goddamn Thirsty Crow
7. Strange Encounter
8. The Ideal Husband
9. Bored In The USA
10. Holy Shit
11. I Went To The Store One Day