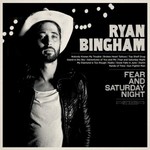 Secluded in an airstream trailer without distractions in the form of people, cell phones, even electricity, Bingham was alone with his thoughts and guitar, sitting still for the first time after a childhood spent moving around the Southwest and years touring the country, with performances everywhere from Fallon and Letterman to Good Morning America and The View. "It felt like I lived out of a cardboard box growing up until I was old enough to buy my own suitcase," he says. "I was just running from everything."

Facing down his past, including the deaths of his mother to alcohol and his father to suicide, resulted in the triumphant 'Fear And Saturday Night', which follows three albums with Bingham's band The Dead Horses and 2012 solo LP, 'Tomorrowland' that reached the Top 10 of the American Billboard Indie and Country charts. The power and ferocity of 'Tomorrowland' was a blood-letting for Bingham, but 'Fear And Saturday Night' is the point of catharsis reached, jubilantly.