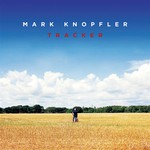 This is Mark Knopfler's eighth solo album, eleven songs inspired by a wide range of subjects (Beryl Bainbridge and Basil Bunting among them). The songs are wry, accurately observed vignettes life wrapped up in a musical accompaniment of distinctive subtlety. As always, Knopfler allows his fellow musicians space in the recordings to put their own stamp on the material but never interfering in the essence of the song itself.

His warm tones of both vocal and guitar combine to give the album a unique MK feel. This release is possibly his most satisfying solo work so far.

Tracker has been produced by Knopfler and Guy Fletcher and was recorded at British Grove Studios in London. The band features Mark Knopfler on guitars, Guy Fletcher on keyboards, John McCusker on fiddle, Mike McGoldrick on whistle and flute, Glenn Worf on bass and Ian Thomas on drums.

Guest musicians include Ruth Moody (from The Wailin' Jennys) on vocals, Nigel Hitchcock on saxophone and Phil Cunningham on accordion.

Knopfler says: "The album title 'Tracker' arrived out of me trying to find my way over the decades. Out of me tracking time - looking at people, places and things from my past, and out of the process of tracking as in recording tracks in the studio."