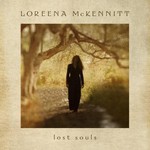 Loreena McKennitt's Lost Souls is her first recording of original music since 2006.

Produced by the award-winning Canadian singer/composer herself, the album is an eclectic tapestry of songs drawn from a wide range of influences, including the Celtic and Middle Eastern with which she has long been identified. "Life has been so full and demanding these past ten years, both personally and professionally," says McKennitt, "and we've been touring at such a steady pace. It's been immensely gratifying to finally get back to the more creative part of the process."

The nine-track album was recorded from May through October 2017 in Hamilton, Canada at Catherine North Studios and at Peter Gabriel's Real World Studios near Bath, in South West England.

Several of the songs were initiated by McKennitt some time ago. Others have been progressively taking shape in the midst of more recent projects and journeys. A few draw on the poetry of John Keats and W.B. Yeats, while another evokes a distinct Middle Eastern flavour. In Lost Souls they all come together to create an artistically diverse and timely collection.

A Brand New Me
more suggestions…