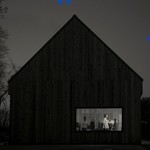 The 7th studio album from The National. Release date: 8 September.