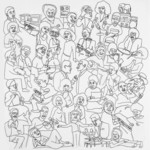 "Great dance music albums - albums that sound as good on headphones and home speakers as they do on club soundsystems - aren't easily made. In a form whose primary aims have been to move dancefloors and to move on, full lengths that thrill the head, heart and the feet with equal power are few and far between. We believe Romare has made one.

The album is a heady mix of homage and fresh approach, a statement from a young artist unafraid to revel in his influences, and confident in his own originality. The songs on Projections are homages to elements of American/African culture in the USA - which Romare studied academically. Taking his name from Romare Bearden, the well-known cut'n'paste artist / collagist, and applying similar techniques to music.

"Rainbow" is a homage to gay rights via disco in the 70's, and "Work Song" to the great American work song tradition. Opener "Nina's Charm" sets out the stall for the album. A tiny, near spoken snippet of Nina Simone's voice is set against a hypnotic synth riff and a dislocated gospel-choir chant. The result is something utterly fresh; a tone setter that worms through the ear and floods the brain in soothing catharsis. "Motherless Child" opens with a shuffling jazz swing, allowing its sample of the African-American spiritual from which it takes its title to shine in full. When a simple, riff-like melody arrives, the song transforms into a sultry, glorious slow-dance workout. "Lover Man's" striking, cut-up synth riff is set up against chiming stabs and slurred chords, a snatched, swing vocal enticing us in to the wonkiest of grooves.

Romare reimagines the profound cultural impact of the collage technique for a new generation of music listeners. Projections, like the best albums from the dance music world, is informed by scenes and genres but not entirely of them. It's a self-contained universe that rewards much exploration. Most of all, it's excited about the possibilities within music, and vastly exciting itself." - NinjaTune