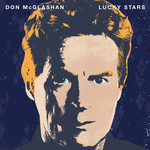 With a strong solo career complementing his work with bands Blam Blam Blam, The Front Lawn and The Mutton Birds, McGlashan has penned many a song that more than a few New Zealanders would consider for the soundtrack of their lives. With a penchant for reflecting on social events within his songs, the political is personal in the world of Don McGlashan; his songs pull strings in the most callous of hearts.

Lucky Stars is a very different and emotionally direct album from the award-winning songwriter, composer and performer Don McGlashan. Putting aside other projects to concentrate on his songwriting, Don McGlashan started the raw material for this new album during a writer's residence at the Michael King Writing Centre on Mt. Victoria in Devonport in 2013, crafted others at a bach on the Thames Estuary, then polished them in Neil Finn's writing room at Roundhead Studio, Auckland with guitarist Tom Rodwell. He produced them with former Mutton Birds bandmate David Long, (who also contributes some textural guitar, organ and banjo) and enlisted former Seven Sisters and current Phoenix Foundation drummer Chris O'Connor.

McGlashan acknowledges Lucky Stars contains many songs which are very personal reflections on his own life and thoughts: "I'm not adopting characters to explore an idea. I still will, but for this album I don't seem to have so much, not taking on a role to get an idea across . . . so the 'I' is generally me in these songs".

And unlike previous albums with the Mutton Birds or those under his own name, these songs enjoy a more simple and direct sound: "I like albums where there are a lot of people playing and my two solo albums have quite a lot of big arrangements, but that's not what I needed for this lot... I didn't add many players, but the ones who did come on board are such distinctive musicians that they ended up adding more than I dreamed was possible. Having my old friend David Long there to bounce ideas off was a huge help too."

"The cool things about songs is they are so small," he says, "and like any small useful thing they seem flimsy and lightweight. But a lot of thought has gone into them. Like a lot of thought has gone into a really good kitchen knife or something made to be used. That's what songs should be really. You want people to sing them in the shower and to occur to people when they are walking along a beach. And if you're lucky some of them do."

McGlashan has five entries in APRA's 100 Best NZ Songs of All Time and two Silver Scroll wins ("Anchor Me" in 1993; "Bathe In The River" in 2006). Nick Bollinger of The Listener said this: "One of our most enduring artists . . . McGlashan is that rare musician who only ever reminds us of himself."