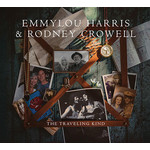 Produced by Grammy Award winner Joe Henry (Billy Bragg, Elvis Costello, Aimee Mann), The Traveling Kind comprises 11 duet tracks, including six new songs written by Harris and Crowell with co-writing by Mary Carr, Cory Chisel, Will Jennings, and Larry Klein. Also featured are new renditions of previous Crowell cuts including "No Memories Hanging Around" as well as new interpretations of Lucinda Williams' "I Just Wanted to See You So Bad" and Amy Allison's "Her Hair Was Red."

Shadows In The Night
more suggestions…