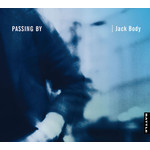 Passing By is a double album set of chamber works by one of our most revered and cherished composers, the inimitable Jack Body. With new recordings from NZTrio and Stephen De Pledge, recent recordings from Kronos Quartet, Del Sol Quartet, Stroma New Music Ensemble, New Music Works Ensemble, David Radzynski, and Ensemble Nomad, Passing By is a testament to the career of one of New Zealand's most inspired (and inspiring) artists.

"Rattle Records' tribute to Jack Body is a double album that embraces the staggering range of a composer who did so much for NZ music. You can hear his electroacoustic works, old and new, including the stutter-toccata of Sssteve; solo violin and cello pieces and top international musicians including Kronos Quartet who create cotton candy magic with Body's Arum Manis." Classical picks of 2015. William Dart

12 Intimate History No.2: Sssteve (14:43)
Electroacoustic
Realised in the studios of the Visby International Centre for Composers, Gotland, April 2008

16 Music dari Jalan (Music from the Street, 8:18)
Realised in the Electronic Music Studios of Victoria University of Wellington in 1974