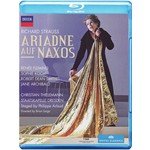 Filmed live in Baden-Baden by the veteran director Brian Large, Renée Fleming makes her debut in the role of Ariadne together with fellow key Strauss interpreters Sophie Koch and Christian Thielemann, following on from their Rosenkavalier triumph.

Thielemann conducts the Staatskapelle Dresden, the orchestra to whom Strauss dedicated his Alpine Symphony and which premiered Feuersnot, Salome, Elektra, Der Rosenkavalier and Daphne.

Fleming's voice might have been made for Ariadne and she achieved a great personal triumph in this production:

"The chief glory of the evening was hearing Renée Fleming, the Straussian soprano par excellence, making her role debut as Ariadne… As the possessor of what is, possibly, the most beautiful soprano voice in the world, she put her vocal treasures in the service of an empathic, nuanced interpretation of the role. From the creamy top, through a rich, warm middle, to the bewitching, darker colours of her lower register, Fleming poured her magnificent sound into Strauss's enchanting melodic arcs, animating the sadness, vulnerability, and desire of the bereft princess..." Frankfurter Allgemeine Zeitung

"Fleming as Ariadne is at her most opalescent; Robert Dean Smith, no god to look at...matches her for vocal ardour. The three nymphs are first rate...Thielemann, slightly over-loving at times, gets predictably top notch sounds from a much-reduced Staatskapelle Dresden" BBC Music Magazine, August 2013 ***

"Music elements are well in hand under Christian Thielemann...once Fleming becomes Ariadne in Act 2, her vocal and theatrical authority are unassailable. It's great to see her in a role that suits her so comprehensively in a production that fully taps into her charisma" Gramophone Magazine, September 2013

"Thielemann does not disappoint...The attention to textural detail is to be treasured...Fleming's sense of the Straussian line cannot be faulted...Koch is the wonderful Composer - impetuous, nervous, practically feverish in her passions...Robert Dean Smith has a voice that lacks an individual stamp but his absolute security and tirelessly make his Bacchus...a success." International Record Review, July/August 2013