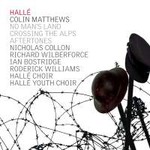 Hallé marks the centenary of the First World War with a recording of award winning work by Composer Emeritus Colin Matthews.

The main work on the recording, No Man's Land follows on from Matthews' very positive collaboration with Christopher Reid on Alphabicycle Order, written for Hallé in 2007, and stages a dialogue between the ghosts of two dead soldiers whose corpses are strung up on the barbed wire of no man's land.

Matthews describes himself as having being "obsessed" with the First World War for some while (his grandfather died on the Somme) but to having found it to be a difficult subject to treat musically. He had asked Christopher Reid to provide the text for this work, suggesting the concept of a soldier in the midst of war, almost unaware of what he's found himself in.

In the event Reid's sequence of poems provided something different: the ghosts of two soldiers hang on barbed wire in no man's land.

The recording features leading vocal soloists Ian Bostridge and Roderick Williams for whom the work was written.

No Man's Land won the 2011 British Composer Award in the Vocal category Aftertones was commissioned by the Huddersfield Choral Society to mark the millennium and Matthews specifically chose to set poetry of the First World War because he felt that we cannot celebrate the twenty first century without absorbing the lessons of the twentieth.

Colin Matthews is Composer Emeritus of the Hallé. He studied music at the Universities of Nottingham, and Sussex, where he also taught, and subsequently worked as assistant to Benjamin Britten from 1972 - 6, and with Imogen Holst from 1971 - 84. He collaborated with Deryck Cooke for many years on the performing version of Mahler's Tenth Symphony. Since the early 1970s his music, ranging from solo piano music through three string quartets and many ensemble and orchestral works, has been played worldwide by leading soloists, orchestras and conductors and has won numerous international awards.

"[Matthews] conveys the poetry's underlying menace, overlaying the chorus's music with diaphanous string harmonies like acrid vapour...[Crossing the Alps] seems to blend Holst's mysticism with Kodaly's more exotic and wonder-struck harmonic style. Yet most affecting of all is No Man's Land." (BBC Music)

"The two soloists are superb and Nicholas Collon gets piquant, pithy playing from the members of the Hallé...The music on this disc is very interesting and the performers have served Colin Matthews very well." (MusicWeb)