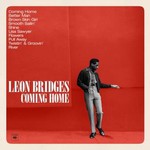 Leon Bridges is a singer out of time. This debut album eschews current pop trends in favour of a vintage, pre-1960s soul sound and Bridges certainly has the vocal talent to make it work.

You'll no doubt already be familiar with the Texan's track 'Coming Home', which has clocked up over 1m views on YouTube. There's plenty more on this debut that follows in that path - well-crafted melodies, a dusty vinyl production and that voice, which sounds like its owner has lived a lifetime (rather than a mere 25 years).

'Better Man' has a breezy charm often favoured by Smokey Robinson and the Miracles, while the gospel ballad 'Shine' opts for a horn-led Stax sound.