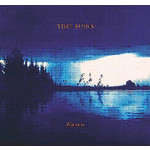 Haunts is an EP comprised of demos and b-sides mostly written prior to Some Were Meant For Sea. so even though it is a step forward in terms of a new release, it is one that casts an eye back to Fullbrook's early writing, perhaps a resetting of the radar prior to unveiling a new, already recorded full length later in 2013.

1. Holes In My Pockets
2. Rolling Mill Blues
3. North of Greytown
4. Days Are Long, Nights are Longer
5. Cold Comfort
6. Always You, Tiptoeing Through