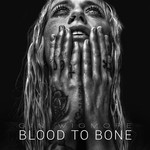 Blood To Bone is an album of many firsts for Gin - she sits behind the piano, stretches her voice into falsetto, manages all the backing vocals on the album and steps into the role of co-producer. The end result is her most powerful release to date.