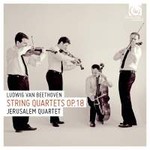 "Only now have I learnt how to write quartets properly"

So wrote Beethoven in 1801, having just finished his first set of string quartets at the surprisingly advanced age of 30: the competition of Haydn and Mozart must have been intimidating for the young composer. But these six Quartets Op.18, which cost him great effort and extensive revision, already display much boldness and originality, from the dramatic echoes of 'Romeo and Juliet' in No.1 to the astonishing programmatic finale of No.6, 'La Malinconia'. The Jerusalem Quartet was founded in 1993, and began its training in Jerusalem, under the direction of the violinist Avi Abramovitch. From 1999 to 2001 the quartet received support from the BBC (as BBC New Generation Artists), then in 2003 it was the recipient of the first Borletti-Buitoni Trust Award. The Jerusalem Quartet is now a regular guest in the world's leading concert halls, notably in the United States where it is increasingly present. It performs with such artists as Alexander Melnikov, Lawrence Power, and Sharon Kam.

The Jerusalem Quartet record exclusively for Harmonia Mundi and their discs have been awarded with numerous prizes. Their recording of Haydn's String Quartets won the chamber category of the 2010 BBC Music Magazine Awards and the Diapason d'Or Arte, while their release of Schubert's Death and the Maiden Quartet received an ECHO Klassik Award in 2009 and was featured as Editor's Choice in the July 2008 edition of Gramophone Magazine. The Quartet's recording of Mozart's String Quartets, released in March 2011, was Chamber Music Choice in BBC Music Magazine. The Quartet is very grateful to Daniel Barenboim who generously loans Jacqueline du Pré's 'Sergio Perresson' cello to Kyril Zlotnikov.

"Passion, precision, warmth, a gold blend: these are the trademarks of this excellent Israeli string quartet" (The Times)