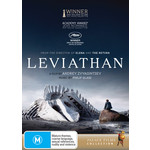 Nominated for an Oscar and winner of the Golden Globe for Best Foreign Language Film, LEVIATHAN is a gripping parable of class, faith and corruption.

Kolia lives in a coastal village near the Barents Sea in Northern Russia, running an auto-repair shop from the garage of his childhood home, shared with young wife Lilya and his teenage son from a previous marriage.

The family's world is under threat: Vadim Sergeyich, the town Mayor, has slapped a compulsory acquisition order on Kolia's prime land, earmarking the site for a development. To Sergeyich's great surprise, Kolia enlists the help of ex-army friend Dmitri, now a hotshot lawyer from Moscow. Soon tempers and passions are inflamed, events spiral out of control, and lives are placed at stake.

"Majestic. Certainly one of the best films of the past year."
Paul Byrnes, THE SYDNEY MORNING HERALD

"You will be enthralled."
Sandra Hall, THE SUN-HERALD

"A masterpiece. Quite unlike any other film you will see this year."
Leigh Paatsch, COURIER MAIL

"Brave and confident. As enormously impressive as it is deeply human."
THE CANBERRA TIMES