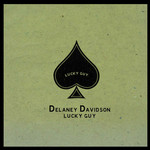 "Lucky Guy" is a compact set of 12 songs recorded in The Lab, Auckland and mixed in New York with Matt Verta Ray (Heavy Trash). Used to the unavoidable sprawl of time and the ramble of his tours, Davidson avoids the technique of collation, curation and compilation that is what we have become used to from him.

Once likened to a rat whose teeth would grow up through its own skull if it didn't gnaw all day, Delaney's restless creativity manages here to capitalise on what he calls the "engine room" behind a lot of the bands and albums he has worked on recently.

Ben Woolley and Joe McCallum, who make up the drums and bass combo that has formed the core of such albums as Tami Neilson's Dynamite and The Sad But True Series, feature strong in the limelight here with Davidson as a Trio. Fleshing out the songs and working them as a only a Trio can, this brings a new life and sinuous muscle to Davidson's presentation of his latest batch: "It was always us looking at each other in the different projects, stages, albums, and rehearsal rooms, I said to the guys let's make a Band. So we worked together until things blew apart again. "Lucky Guy" was recorded in that period."

Featuring (typically) a demo version of one song (Give Me Your Hands) as well as one recorded during his European tour on a day off in Geneva (a classic take of Dorsey Dixons "Wreck On The Highway"), The songs reflect life as a musician, leaving a lot of the storytelling behind for real life observation. Suburban soul pop classic "You Don't Want Me Around" and Friday night rhythm and blues flavours of "Tell It To You" sit next to maudlin glam travel ballads "Eastbound" and "Wait" - winner of the Worlds Saddest
Songs competition Berlin 2010. Armed with the usual alarms his voice sets off, and his "drive on the line"approach to melody and harmony, Davidson says this album constitutes one of the most realised and strongest thematic offerings he has released.

"Lucky Guy is about a wind change. I wanted to keep the songs short and to the point, more direct and remove some of the decorations I like to work with. The stories are more in the lyrics than in the music. It's almost the album I should have released first."

Broken Wheel
Something Wrong
You Don't Want Me Around
Who Will Carry You
Eastbound
Tell It To You
Wreck On The Highway
Gimme Your Hands
Five Bucks, Black Bo
Show Me How
Wait