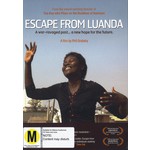 A year in the life of Angola's only music school, situated in Luanda, the capital of Angola, and one of the world's poorest and most dangerous places.

In Luanda, one of the world's poorest and most dangerous places, three students from Angola's only music school work towards their end-of-year concert. The Music School is Angola's first and only school of its kind. It houses some 80 students, most of them desperately poor. Many face disapproval and outright rejection from their families who can't see a future in music. This film asks if, despite the ravages of 27 years of civil war, musical passion can overcome terrible hardships.

Each of the students paint heartbreaking images of their own experiences of the civil war, and it's difficult to imagine how they can continue with everyday life. But they do, with music as their focus.