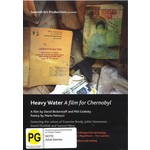 Heavy Water - A Film For Chernobyl

Using works from Mario Petrucci's award-winning book-length poem for Chernobyl, the film tells the story of the explosion and its catastrophic aftermath.

Petrucci's poetry forms the backbone of the film's narrative. The poems - absolutely unflinching and painfully precise, yet compassionate - are cut together with revealing archive and evocative location footage of the ghost-town of Pripyat and the surrounding exclusion zone. The poems are read by actors Juliet Stevenson, David Threlfall and Samuel West.

The film has been over a year in the making. Directors Phil Grabsky and David Bickerstaff travelled to Ukraine and into the exclusion zone to film the deserted town of Pripyat and the interior of the destroyed reactor, and to meet some of the 'settlers' who have rebuilt their lives inside the radioactive area, despite official advice. They then worked closely with Petrucci to cut the words and images together. It was a new experience for all of them. The result is an intensely moving film, which, rather than relating the technical details of the world's biggest ever industrial accident, emphasises the effect of the disaster on the people of Chernobyl.