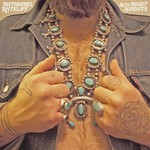 Since the release of the critically acclaimed 'In Memory of Loss' in 2010, Denver's Nathaniel Rateliff has made his way around the world playing his unique brand of soulful folk and supporting the likes of Bon Iver, Mumford & Sons, The Lumineers and Wilco to name a few. 2014 saw the release of his second solo album 'Falling Faster Than you Can Run', which again picked up praise across the board. Since then, Nathaniel has embarked on a new project 'The Night Sweats', a brass infused, upbeat soul band who have spent the last year playing sold out shows in Denver and receiving rave reviews. Nathaniel Rateli and The Night Sweats have just finished recording their self-titled debut album with Richard Swift (Black Keys,The Shins) in the woods of Oregon. It is set for release in late Summer 2015 on the legendary Stax label in the US and Caroline International in the rest of the world.

I Need Never Get Old
Howling At Nothing
Trying So Hard Not To Know
I've Been Failing
S.O.B.
Wasting Time
Thank You
Look It Here
Shake
I'd Be Waiting
Mellow Out