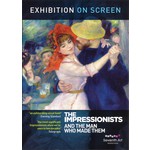 Exhibition on Screen: The Impressionists

They are the world's most popular artists. The works of Cezanne, Monet, Degas and their compatriots fetch tens of millions of dollars. But just who were they really? Why and how did they paint? What lies behind their enduring appeal? The Impressionists studies a major exhibition focusing on the 19th century Parisian art collector Paul Durand-Ruel, the outspoken champion of impressionism who exhibited the impressionists in New York in 1886. It tells his remarkable story as well as the artists.