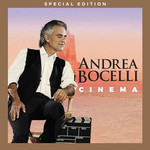 Cinema features a collection of movie songs etched in the culture and hearts of several generations including epic theme songs featured in films such as "Doctor Zhivago", "Love Story", "The Godfather", "Life is Beautiful", "Gladiator", "The Postman", "Breakfast at Tiffany's" and many more, as well as popular songs from stage musicals, immortalised by their film versions, such as "West Side Story" and "Evita."

Bocelli's legendary voice partnered with fantastic new arrangements and state-of-the-art recording technologies brings new life to some of the greatest musical masterpieces for film by composers who made both film and music history during the 20th century, from Leonard Bernstein to the legendary Ennio Morricone.

True to his status as a truly international artist, Andrea has recorded songs in five different languages (Italian, French, Spanish, English and Sicilian) and has partnered with global superstar Ariana Grande on the heart wrenching duet "E Piu Ti Penso" from 'Once Upon A Time in America'/ 'Malena' and Nicole Scherzinger on the epic musical anthem "Don't Cry For Me Argentina" from 'Evita.'

Bocelli said the following: "With the album 'Cinema,' I'm fulfilling a wish that I've harboured for decades. I've never made a secret of my dream of bringing to life a recording project associated with soundtracks, as I truly believe that it's an exceptional artistic treasure trove.

It's an area that has always fascinated me: the scores written for films are very free and potentially very creative. A vast grassland where the composer can roam as he pleases, whatever his inspiration, where he can experiment without having to submit to the norms of the classical song (based on the sequence requiring two strophes, one short instrumental passage, one strophe, one short instrumental passage), or to a theme that is necessarily the conventional one, relating to love.

If films are a "dream factory", the music that supports them embraces these dreams and heightens all of the magic and emotional vitality. My invitation, my token is for these immortal "classics" to merge with the experiences, with the most precious memories, with the emotions of every listener, to become the inimitable soundtrack to their life."

Maria (From "West Side Story")
La chanson de Lara (From "Dr. Zhivago")
Moon River (From "Breakfast At Tiffany's")
E più ti penso (From "Once Upon A Time In America") (duet with Ariana Grande)
Be My Love (From "The Toast Of New Orleans")
The Music Of The Night (From "The Phantom Of The Opera")
Por Una Cabeza (From "Scent Of A Woman")
No Llores Por Mi Argentina (From "Evita")
L'Amore e una costa Meravigliosa (From 'Love is a mant splendored thing)
Mi mancherai (From "Il Postino/The Postman")
Cheek To Cheek (From "Top Hat")
Sorridi amore vai (From "Life Is Beautiful")
Historia se Amor (From 'Love Story')
Ol' Man River (From 'Show Boat')
Nelle tue mani (Now We Are Free) (From "Gladiator")

DVD From The Great Performances PBS Special. Recorded Live At The Dolby Theatre

A Love So Beautiful
more suggestions…