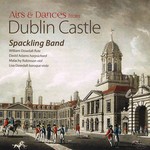 The halls of 18th Century Dublin resounded with this music, much of it now rediscovered and recorded for the first time.

In the 18th Century Dublin was the second city of the Empire with a population only slightly less that London's, and was larger than most European cities. There was thriving music scene around the Dublin Castle area, where instrument makers and music publishers vied for the business of the wealthy. Handel' visit to Dublin for the premiere performance of Messiah attests to the quality of the musicians and choirs, and made Dublin an attraction for many composers from abroad including Dubourg, Geminiani, Bocchi and Castrucci. These composers wrote music for sumptuous balls at Dublin Castle, some of which rivalled London for their splendour.

Dublin's reputation in the 18th century as a significant European centre for composition meant there must exist a body of music that had not been performed since. The search for these was conducted at the National Library of Ireland, specifically the Joly Collection. Among the volumes was one containing Dublin Castle music for balls. Its was essentially and 18th century gig book, containing minuets, gavottes, maggots and rigadoons, notated in the form of a simple treble line and a bass line. This minimal material was realised by harpsichordist David Adams.

Spackling Band is made up of some of Ireland's leading specialists in the field of Baroque and Classical music and is committed to unearthing and performing little known works of that era on historically sensitive instruments. Francis 'Spackling' Dowdall was a member of the State Orchestra in Dublin Castle around 1720. He would have performed outdoors as a drum or trumpet player on horseback, and indoors as a flautist or oboist, and came to prominence in 1723 when he was dismissed after falling off his horse a number of times due to an 'overly emotional state' caused by too much wine at lunch!

"William Dowdall is an Irishman with Kiwi connections, celebrated on CD when his 2010 album, Breathe, showcased solo flute pieces by New Zealand and Irish composers.

The flautist travels back to the 18th century for his latest venture. There was journeying, too, for Wayne Laird of Atoll Records, who set up microphones in Dublin's St Ann's Church to capture the diverting 76 minutes of Airs & Dances from Dublin Castle.

There has been scholarly inspiration here; Dowdall delved into manuscripts at Ireland's National Library to uncover what is described as "gig books" for various balls at Dublin Castle.

While today's dance parties are fuelled by a DJ's computer, back then, the music was live - here it's played by Dowdall and his three colleagues of the Spackling Band. Offerings include a "favourite minuet" by Handel, reminding us that Dublin was first to hear the composer's Messiah.

A definite highlight, thanks to Dowdall's expressive playing on his Abell wooden flute, are some poignant variations on an Irish tune by the Italian Geminiani, who had close associations with the same city.

The Celtic tunefulness of numerous tracks, including the quaintly-titled Mr Fischer's favourite variations on the celebrated Irish air of Gramacree Molly, makes for unmitigated pleasure.

You will enjoy the relaxed team work of Dowdall and David Adams, a harpsichordist who's not afraid to be flashy.

At times, in what may seem like a few too many Minuets, by obscure composers like Matthew Dubourg and Pietro Castrucci, a touch of dare-devil ornamentation by Dowdall would not have gone amiss.

Right at the end of this very entertaining collection are two pieces by the great Turlough O'Carolan, the blind harpist/composer, and friend of Geminiani.

First is the unaccompanied King of the Blind, with Dowdall at his most exquisite. Following this is the livelier O'Rourke's Noble fare will ne'er be Forgot.

Remembering the romp-around-the-hall energy of The Chieftains when they took on a Carolan number, this quartet seems a little tame. Who knows, with a tad more spontaneity and a touch of percussion on the side, this may have made a ceilidh-closer to cherish.