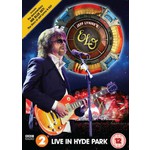 The Electric Light Orchestra, led by one of rock's most iconic songwriters and producers, Jeff Lynne, are one of the most successful British bands of the seventies and eighties with global sales in excess of 50 million albums. In September 2014, Jeff Lynne's ELO headlined BBC Radio 2's "Festival In A Day" in London's famous Hyde Park. It was the first time in almost 30 years that the band had performed on a festival stage and they delivered a stunning show, The 50,000 tickets for the event had sold out in a matter of minutes and the fans sang along to hit after hit performed by Jeff Lynne and the band accompanied by the BBC concert orchestra.

Also on this disc is the feature length documentary "Mr Blue Sky - The Story of Jeff Lynne & ELO" which explores Jeff's career from his early days with The Idle Race and The Move, through ELO's spectacular success and on the The Travelling Wilburys and his prolific and highly successful work as a producer.