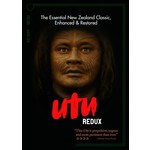 "Hands down, the best New Zealand movie of our time" - Quentin Tarantino.