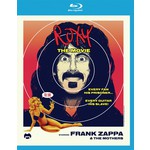 Frank Zappa show goes way beyond a mere concert - it is an experience…a flight of improvisation, musicianship, and cerebral cynicism. An unparalleled Composer and Guitarist, Zappa redefined rock n roll paradigms by introducing into the mix his favorite influences from classical music, jazz, blues, doowop, traditional and non-traditional music. And he did so with unparalleled humor and audacity. But it was the music itself that influenced generations of musicians and, quite frankly, blew minds. Roxy: The Movie, filmed over three nights in December 1973, at the Roxy Theatre in Hollywood, CA, is a powerful display of this experience, and reveals what made him such a pioneering musical revolutionary.

Right from the top of the program, the film exudes the essence of Zappa, as we only see a dark room with a single light, and we hear him commiserating with the audience, as he stalls for time because of technical snafus that would ultimately force the film into hibernation for decades (make that eras in musical terms) while advancement in technology aligned allowing the Zappa Family Trust to bring this project to a patient and deserving audience. The curtain goes up and the magic unravels to reveal "Cosmic Debris" and we are up and away with one of the most enduring band line-ups under Frank Zappa's leadership.

"Frank broke all sound barriers in Music and pushed musical event horizons to educate and entertain his audiences so they could experience real possibilities on a contemporary music stage - all without taking himself seriously. He always said he had "something for everyone from 8 to 13." Being a mom I can tell you, that is when your imagination is wide open and some of those ideas stay fixed and expandable in time and space forever," says Gail Zappa.

"I'm beyond thrilled that Roxy The Movie is finally going to be available. It took a herculean effort to bring it to life. So much love, time, energy and attention to detail went into its resurrection. This movie rocks so hard, I think both old and new fans will agree," says Ahmet Zappa. "Enjoy!"