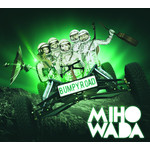 Entirely in synch with MJO's fun-loving energy and humour, this album was written while touring with Miho's baby bump, and recorded during the lead up to the baby's arrival. The ultimate tour diary to motherhood, Bumpy Road introduces the fresh flavour of world music to Miho's more familiar J-pop style jazz compositions.

Combining the skilled musicianship and friendship of the Miho's Jazz Orchestra band members with the expert craftsmanship of studio engineer Olly Harmer, Bumpy Road captures the dynamic mood swings of the emotional pregnancy roller-coaster. Sprinkled with mystery and uncertainty about the changes to come, this album blends the warmth and authenticity of MJO's powerful live performance with the excitement, joy and anticipation surrounding the genesis of a new life.

Following the successful release of MJO's live album MJO Live @ The Lab (2014), Bumpy Road was recorded live at the Lab Recording Studios in Auckland, marking the sixth release for Miho's Jazz Orchestra since their formation in 2011. Their most recent studio album Mystery Banana (2014) reached #13 on the New Zealand Album Charts. 2014 also saw Miho tour Japan with MJO and record her EP side project Memphis Dreamin' (2014) at the legendary Sun Studio in Memphis, Tennessee.