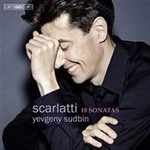 With the 2005 release of his first recording for BIS Records, Yevgeny Sudbin catapulted into the pages of the international music press. The disc was a Scarlatti recital that prompted reviewers worldwide to compare the then 24-year old pianist in the most flattering terms to Scarlatti experts such as Horowitz and Pletnev. It went on to receive a long list of distinctions, including an Editor's Choice in Gramophone, where the accompanying review described it as 'among the finest, certainly most enjoyable of all Scarlatti recitals'. Since then, Sudbin and BIS have enjoyed a highly successful collaboration, resulting in numerous acclaimed recordings of both solo programmes and concertos. To celebrate the past 10 years, a new Scarlatti recording seemed the obvious choice for an anniversary present - to ourselves, and of course to all Sudbin fans and Scarlatti lovers. Said and done: Sudbin met up with Marion Schwebel, the recording producer with whom he has collaborated from the very beginning, for recording sessions in the silken acoustics of St George's in Bristol. The results can be heard on this new disc: 18 sonatas selected from the total of 555 - a collection of a striking, even bewildering, variety. Through it all, Sudbin guides us with authority but also obvious relish as he brings to life elements which his own liner notes describes as 'church bells and gunshots (K119), howls in the streets (K479), trumpets appearing on the horizon (K159), head-spinning dances (K425) but also a wonderful sense of humour (K125) - as well scenes as melancholic, lean and desiccated as a sun-baked Mediterranean landscape (K99).'

"Scarlatti on piano has popped up frequently in recent decades, and Sudbin is of the school that an up-to-date pianistic approach is desirable. In his booklet notes he argues that "the music has to be transformed and adjusted to the modern instrument and one has to make conscious decisions about how to do this without distorting the original idea." Only Scarlatti himself would really be able to tell us if he considered the Busoni-like conclusion to K 417 to be too much of a distortion, but whatever you think there can be no real argument that Sudbin's performances of these and other super-quick sonatas such as K 56 are anything less than hugely invigorating.

Sudbin's touch in the gentler sonatas, such as K 213 is all the more of a contrast to the excitement elsewhere, and he turns these into moments of genuinely breathtaking beauty. He keeps everything simple where simplicity is required, adding the occasional extra octave in the bass to reinforce the occasional harmonic or counter-melodic point, but in these cases such mild intrusions are done with tasteful restraint. The recording, made in the superb acoustic of St George's Bristol, is of demonstration quality - crisply detailed, but set at a perfect distance and with just the right balance between definition and atmosphere." MusicWeb March 2016

"More than a decade on from his impressive debut on the BIS label - and indeed in our pages - with music by Scarlatti, Yevgeny Sudbin returns to the composer with a truly triumphant recital." (Gramophone Award Nomination 2016 - Instrumental)

"Long immersed in Scarlatti's music, Sudbin is an ardent advocate, his fearless Russian-school technique making light weather of even the most breakneck writing: rhythms are crisp and buoyant; virtuoso passagework is dashed off with devil-may-care abandon. This is impressive playing, by any standards" (BBC Music)