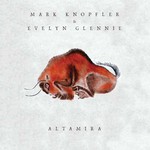 'Altamira' is the story of the accidental discovery of Patheolithic paintings by Marcelino Sanz de Sautuola, an amateur archaeologist, and his nine year old daughter Maria, in 1868 inside Altamira's caves located in Cantabria in the North of Spain.

The project was recorded at Mark's London studio, British Grove, and also features the world famous percussionist, Dame Evelyn Glennie. The album was co-produced and engineered by Guy Fletcher.

Girls In Peacetime Want To Dance