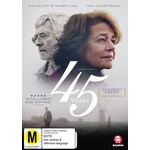 Kate Mercer is planning a party to celebrate her 45th wedding anniversary. One week before the celebration a letter arrives for her husband, Geoff, containing news that the body of his first love has been discovered,frozen and preserved in the icy glaciers of the Swiss Alps.

Kate continues to prepare for the party, but she becomes increasingly concerned by Geoff's preoccupation with the letter and the startling
revelations about his former life. As their anniversary gets closer, and they delve further into the past, their future is left in question....